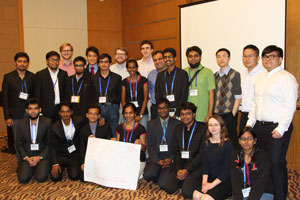 In addition to the three overall winning teams, the SP Cup 2016 judging committee is pleased to announce the following special recognitions and honorable mentions.

Team “USTC2016”, University of Science and Technology of China, China

SP Cup 2016 has engaged participants from nearly 30 countries. 334 students from 23 countries formed 52 teams registered for the competition; among them, more than 200 students in 33 teams turned in the required submissions by the open competition deadline in January 2016. In addition to the three finalist teams and the three honorable mention teams, the following teams made for the Final Ten based on classification accuracy in the open competition round; they achieved a classification accuracy above 80% for the 100 test samples given:

Congratulations to the winners and honorable mention teams on their excellent performances! Thanks all participants for making SP Cup 2016 successful! Special Acknowledgement of Mathworks, Inc. for their strong support of SP Cup 2016 and every SP Cup to date since its inception.

Stay tuned for an article highlighting SP Cup 2016 in the IEEE Signal Processing Magazine. And the SP Cup 2017 will be announced in the 2nd half of this year.

The IEEE Signal Processing Society (SPS) invites you to participate in the Third Annual International Signal Processing Cup (SP Cup) Competition. The SP Cup aims to provide undergraduate students with opportunities to form teams and work together to solve a challenging and interesting realworld problem using signal processing techniques. The 2016 SP Cup will be held in March 2016 at the 2016 IEEE International Conference on Acoustics, Speech and Signal Processing (ICASSP, www.icassp2016.org/) in Shanghai, China. Three top teams from the preliminary round held before the conference will be selected and invited to present their work at ICASSP 2016, where prizes will be awarded.

All undergraduate students are encouraged to participate. Please feel free to distribute this email to students, friends, and colleagues who may be interested in this competition.

For technical details of the competition project, please visit: https://piazza.com/ieee_sps/other/sp1601/home.

(General information and resources are available on the Piazza education community platform without requiring a login; to access datasets and references as well as to participate in the community discussions and Q&A, please visit https://piazza.com/ieee_sps/other/sp1601 to set up a free account and use the access code "sp1603" to join as a student to "SP 1601: SP Cup 2016”.)

Participation in the Competition:

Participating teams must submit their projects by 17 January 2016. Each submission should include a report, in the form of an IEEE conference paper, on the technical details of the methods used and the results, as well as the programs developed (such as an executable program or an MATLAB App). More detailed submission guidelines will be posted on the SP Cup web page.

Participating teams must register to join the competition by 10 December 2015. And by 7 February 2016, three finalist teams will be identified to participate in the final competition at ICASSP 2016.

MathWorks is pleased to sponsor the 2016 SP Cup. MathWorks will provide complimentary software, including MATLAB and selected toolboxes, to teams registered for the SP Cup for use in the competition.

The organization of 2016 SP Cup Competition is led by members of the IEEE Information Forensics and Security Technical Committee (IFSTC), and overseen by the IEEE SPS Student Services Committee.